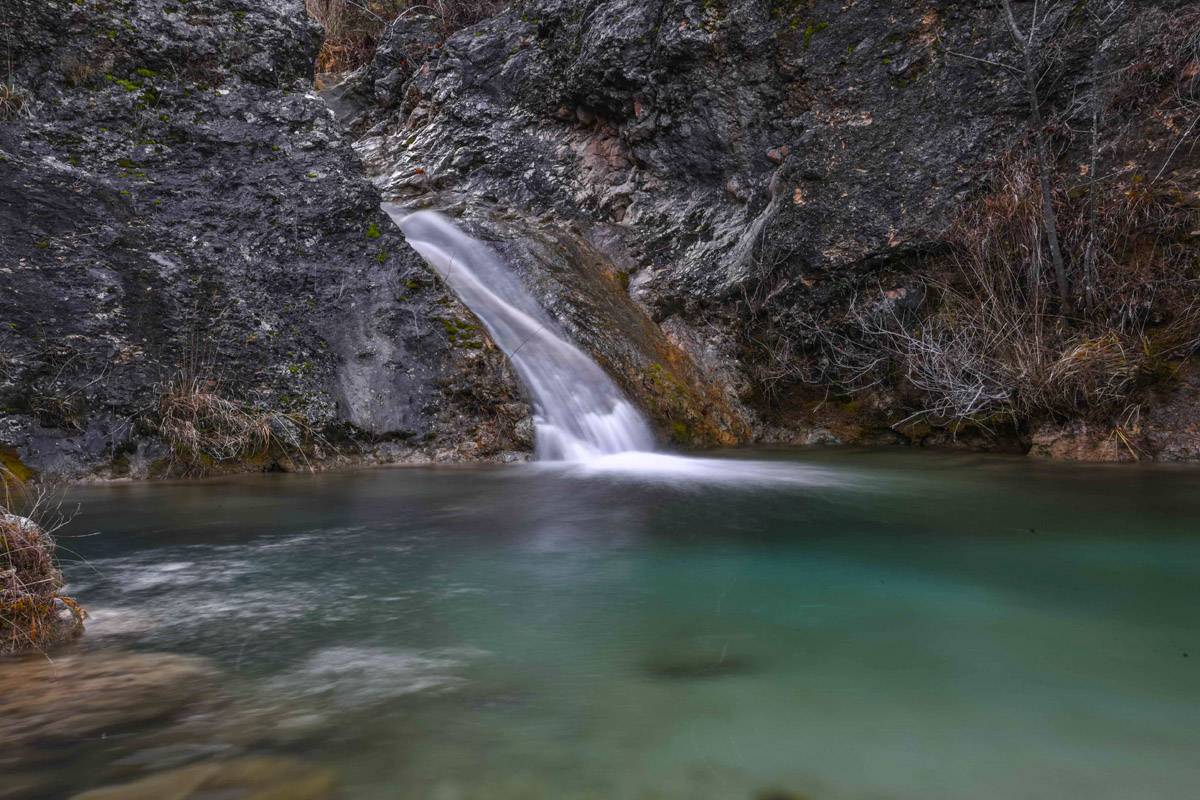 The significant landscape of Sutina has been under protection since 2000. The landscape's area of 426.80 ha includes the upper canyon part of the Sutina stream, a tributary of the Cetina River. Due to its unusual vegetation arrangement, the canyon of Sutina, a rapid mountain stream, makes a typical example of botanical inversion. From the lowest point of the canyon to the peaks of the surrounding hills you can see beech (Fagus sylvatica), eastern hop-hornbeam (Ostrya carpinifolia), oriental hornbeam (Carpinus orientalis) and oak (Quercus virgiliana), while the rocky meadows abound with everlasting (Helichrysum italicum), sage (Salvia officinalis), winter savory (Satureja montana), oregano (Origanum sp.), thyme (Thymus serpyllum) and many more. There are many different butterflies flying around the flowers of these plants in search of nectar, such as swallowtail (Papilio machaon), black-veined white (Aporia crataegi), along with diverse families, as those of the whites (Pieridae), brush-footed butterflies (Nymphalidae), the browns (Satyridae) and gossamer-winged butterflies (Lycaenidae).

The diversity of plant cover, the shrubs, holes and cliffs provide a nesting place for numerous bird species. On the cliffs of the canyon there are nests of the grey wagtail (Motacilla cinerea), while dense forests are the habitat of the black woodpecker (Dryocopus martius). The grass on the rocky plateaus of the protected belt is where the woodlark (Lullula arborea) and the Greek partridge (Alectoris graeca) build their nests. The tall pine trees make a nesting place of the buzzard (Buteo buteo) and the northern goshawk (Accipiter gentilis). At the end of the canyon, where there are sandy sloping grounds as a result of the forcible effects of erosion, we can find tunnels of the European bee eater (Merops apiaster) and there it raises its young.

The dense forests of Sutina, its karst area, evergreen undergrowth and rocky meadows provide both the feeding and the breeding place for mammals, such as the wild boar (Sus scrofa), which has inhabited the region permanently along with the fox (Vulpes vulpes), the hare (Lepus europaeus), the beech marten (Martes foina), the hedgehog (Erinaceus concolor) and the badger (Meles meles). Sutina waters house various amphibians, such as the yellow-bellied toad (Bambina variegata), the marsh frog (Pelophylax ridibundus) and the European spotted salamander (Salamandra salamandra). Shallow ponds in the valleys of the canyon enable trouts and crayfish to survive during the dry season. While the most dangerous snake species is the horned viper (Vipera ammodytes), the commonest lizard species is the common wall lizard (Podarcis muralis).

The geomorphological structure of the Sutina canyon is made of limestone and dolomite, whereas an abundance of fossils is disclosed to visitors due to the effects of erosion.

In accordance with the Nature Protection Act, the significant landscape of Sutina is under the direction of the Split-Dalmatia County Public Institution for the Protected Natural Values Management.

View the embedded image gallery online at:
https://www.visitsinj.hr/en/discover/beauty-spots/significant-landscape-of-sutina#sigProGalleria5242307af9
back to top