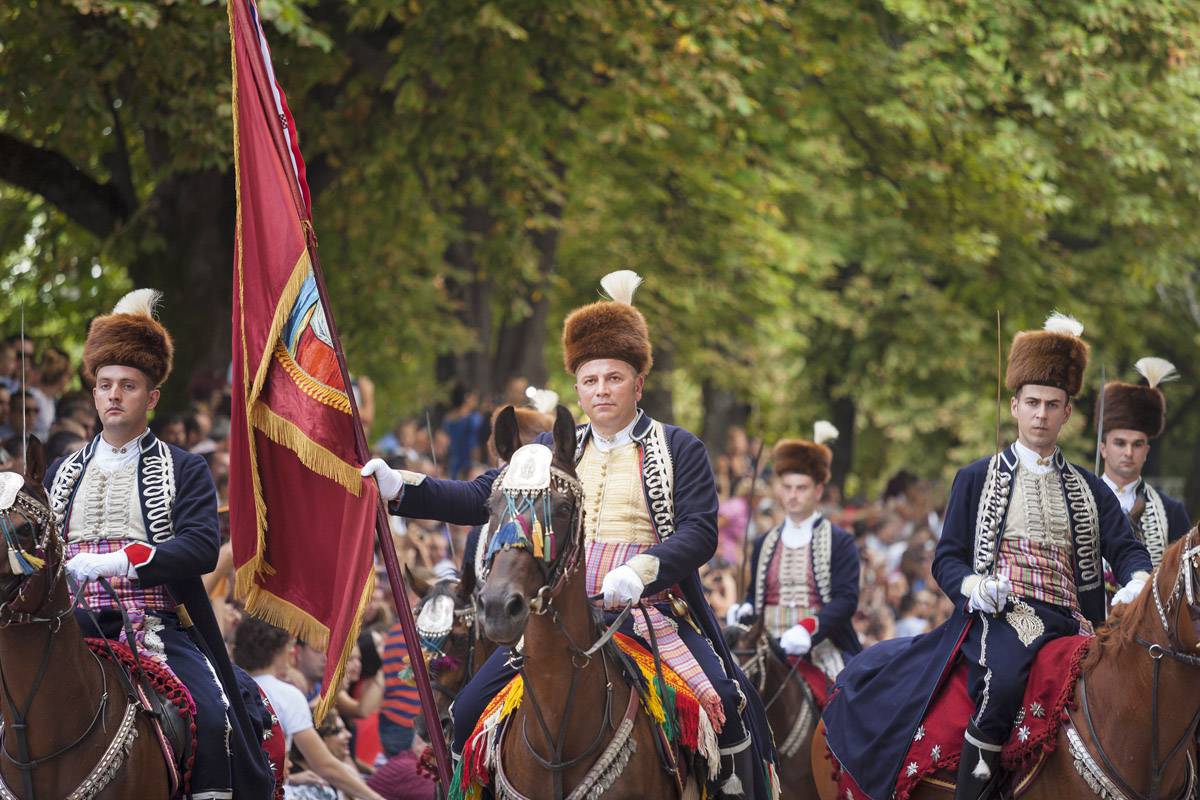 The Alka squires are dressed in traditional folk costume. The kumparan, flung over the left shoulder, is bordered with a red silk band, whereas the ječerma features rich silver plates decoration at the front and filigree ornamentation, the small ilici (sg. ilik, small buttonhole or button loop) with fairly large silver rings. The large side silver toke (sg. toka, silver button or plate) remain unfastened. The squires also wear the dark blue homespun trousers and a white cotton shirt, and wound around the head is a red cap decorated with tassels and a small bunch of flowers. Around the waist is tied a red waistband and the leather pripašnjača, a silver belt for carrying weapons. A long yataghan and two kubure (sg. kubura, old-fashioned pistol) are tucked into the pripašnjača (?snake's nest?). On their left shoulder the squires carry flintlocks. Their footwear includes homespun socks and the embroidered terluci as well as the lightweight opanci oputaši which are characteristic of the Cetinska Krajina Region (the top made by lacing together narrow straps called opute, sg. oputa).

The arambaša, the leader of the Alka squires, wears costume similar to that of the squires, only more elaborate. The edge features the gilt majite (sg. majita, clasp), and on the ječerma are little gilt plates with six gilt rings. The red baize kumparan is flung over the shoulder, a waistband is made from multicoloured silk, and tucked into the pripašnjača are decorated kubure, a yataghan and a kamiš (pipe stem) with iron tongs (for handling the embers for a pipe).

Drummers, trumpeters, the alka-ringsetter and his assistant wear plainer folk costume, with a red cap decorated with tassels. Members of the Court of Honour are dressed in dark blue formal suits featuring a blue band at the front.

The Alkari are dressed in traditional knight costume. The dark blue baize trousers feature silver embroidery. Under the long dark blue baize dolama (formal Alka coat) is a shirt with the majite and the embroidered krožet with the white linen back. The front is decorated with thicker horizontal bands ending in loops close to the opening. A multicoloured silk waistband is several times wound around the waist. They wear white gloves. Headwear includes the marten fur kalpak (high-crowned cylinder-shaped cap) featuring a white crane plume. On their feet the Alkari wear black leather boots with spurs, the top edge appliquéd with gold or silver galloons with silver thread tassels.

Costume of the Alka Master differs from the others in that it is dark brown and elaborately decorated. The dolama, krožet and trousers are embroidered with gold thread, and all the filigree buttons are golden as well. The dark brown marten fur kalpak features a heron plume. His sabre is gold-bound with rich decoration.