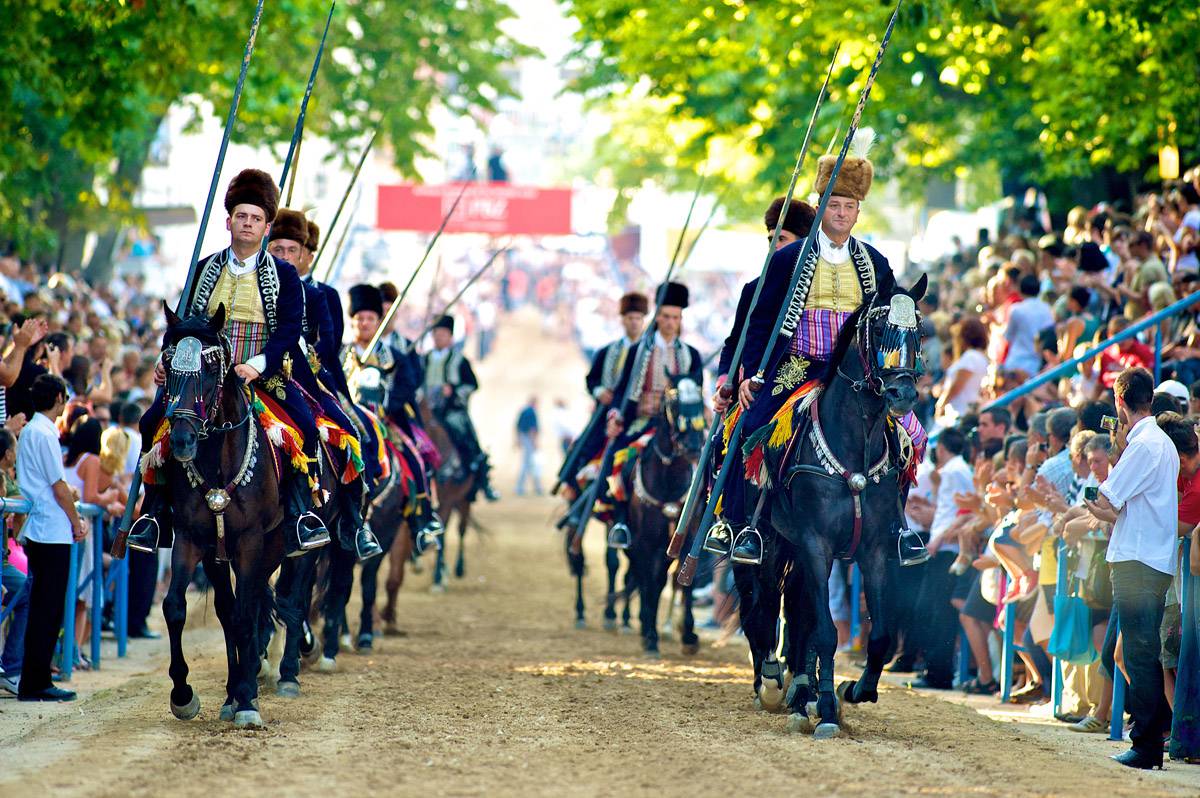 For centuries Sinj has been a pearl each government wanted to adorn itself with, a boundary stone between the coast and the inland, surrounded by the nearby mountain peaks, the Cetina River and its tributaries. Although shaken by earthquakes, destroyed and burnt by conquerors, who imposed their foreign languages, religion and customs, the Town still grew stronger, unyielding and defiant. The renowned folk poet Father Andrija Kačić Miošić wrote a poem praising the 1715 grand victory over the Turks: ″The Town of Sinj, the mace of gold, / Heroic megdan from days of yore …″

In honour of its heavenly patroness the Madonna of Sinj, who, according to the tradition, forced the Turks into flight in 1715 (''a woman in white was seen, walking on the walls of Sinj''), as an eternal vow of devotion and respect, the people of Sinj instituted the Alka – the knights tournament of Sinj, and thus each year on the first Sunday in August the glorious victory is revived.

The name Alka (Tur./Arab. halqa: ring, hoop) is derived from the details of the stirrup bottom from the saddle of a horse, seized from the Ottoman serascher-pasha Čelić. In the Alka ceremony two men lead a horse by the reins, which symbolises the Pasha’s horse, the edek.

The ring, alka, consists of two concentric iron circles joined by three bars, so that the distance between the circles is divided into three equal parts. The central circle, which is the smallest one, is worth three points (punat), the upper field two points, and two lower fields one point each. The knight – the Alkar – aims at full gallop at the alka with an iron-topped wooden lance. The winner of the Alka is the one who wins the highest number of points (punti) in the three races. In the event that more contestants have the same number of points, they gallop again until one of them collects more points than other(s), and this is called pripetavanje.

The ceremony of Alka lasts for three days. The contest starts on Friday for the Bara, whereas the Saturday contest is called the Čoja. The solemn Sunday Alka Knights procession is led by the harambaša and the selected Alka squires (alkarski momci). They are followed by mace-bearers (buzdovandžije) and the trophy Turkish shield-bearer. At the rear of procession come the edek’s guides. The troop of Alkari, who ride double-rowed, is led by the standard-bearer (carrying the Alka Knights Tournament Society banner, accompanied by the Image of the Madonna of Sinj and Croatian tricoloured flag) with henchmen and the Tournament Master (alkarski vojvoda), the commander of the procession, with his adjutant. At the rear of procession rides the commander of the Alkari, called alajčauš. The 11 Alkari at least, 15 of them at the most and exceptionally the 17 Alkari comprise the Alka procession.

The Alka squires march along in the procession, together with their leader (harambaša). The Alkari, dressed in the early 18th century authentic knights attire of Sinj defenders, ride richly decorated horses. On their right side, they are armed with a lance and a sabre.

An Alkar has to be born in the Cetinska Krajina Region, be hawk-eyed and have a strong right hand (oko sokolovo i čvrsta desnica). Above all, he has to be an honourable and honest man.

The Tournament of Alka originated at the time when there were many similar knightly tournaments throughout Europe. All of them have now fell into oblivion, except the Alka Tournament of Sinj, which is at the dawn of its tercentenary and under protection of UNESCO as world intangible heritage. The Alka Tournament is a symbol of the struggle for freedom, peace and hearth, for faith and hope. It unites the past and the future, praises the honour and integrity, the customs of our ancestors, heroism and bravery.

In 1932 Nikola Jelinčić – Bećo managed to win the Alka only after the contestants with the same number of points (punti) had galloped again for five times (pripetavanje). On that occasion he collected 16 points (punti) in total. According to the Alka annals, it has been the best result up to the present day. The lowest-number-of-points victory was achieved by the Alkar Dušan Dinarina, who won the Alka in 1979 collecting only 5 points (punti).

Most triumphant living Alkari include:

Alka and The Republic of Venice

The victory and heroism of the people of Sinj in the 1715 battle against the Ottomans were praised in Venice to the extent that the Venetian authorities had a painting of the battle of Sinj painted at the Doge's Palace in Venice.

The distinguished Split polyhistor Julije Bajamonti (1744-1800) is the author of the oldest preserved written evidence of the Alka of Sinj.

In 1818, Emperor Francis I of Austria, accompanied by his wife Empress Caroline, paid a visit to Sinj. The Alka, the knights tournament of Sinj, was held on that occasion in honour of the Empress. The Emperor was delighted about the Alka to the extent that he decided that from then on the winner should be presented with the sum of 200 kroner from the Empire Treasury. It has been recorded that Francis I presented a valuable diamond ring to the then winner of the Alka. He also gave an imperial banner as present to the Alka Knights Tournament Society.

In 1838 the Alka was held honouring the visit of King of Saxony Frederick August II to Sinj. The King's attendant Johann Sartory noted in his diary that the King admired a deep attachment of the people of Sinj to the knights tournament of Alka as well as the high worth of the Tournament itself. In the same year, Sartory's record of the Alka of Sinj was translated by Ivan Mažuranić, a renowned Croatian writer and the ban of the people (ban pučanin). It was further published in the Danica Ilirska, the first Croatian literary journal.

Alka and Francis Joseph I

In 1908 the romantic narration Alkar, the author of which is the Croatian writer Dinko Šimunović, was published. Alkar has been the most authentic and famous work of literature dealing with the subject of the Alka of Sinj. It has further been translated into a number of world languages, into Chinese as well. Under the Ring title it was published in 1936 by the well-known Shanghai publisher Shangiru.

The 1928 Alka ceremony was delayed due to the tragic event of the murder of Stjepan Radić, the leader of the Croatian people. Instead the Alkari attended the grand funeral of Stjepan Radić at Zagreb.

The first TV broadcast of the Alka Tournament took place in 1965. The commentator was the Sinj legendary and inimitable sports journalist Mladen Delić.

Alka and the Homeland War

In 1991, the Alkari and the Alka squires represented the only Croatian historical unit participating in the solemn review of the Croatian National Guard that took place on 28 May in Zagreb. That day has been celebrated as the day of the birth of the Croatian Armed Forces.

Alka and the Oktoberfest

In 1996, the Alkari of Sinj attended the opening of the Munich Oktoberfest, the world greatest folk festival.

In 2006, on the occasion of the centennial celebration of The Dalmatian Family Society of the Miraculous Lady of Sinj gathering the Croatian expatriates in Chicago, the Alkari and the Alka squires participated in the traditional solemn procession down the streets of Chicago carrying the Image of their heavenly patroness, the Madonna of Sinj.

Mortars roaring, flags fluttering in the wind,
Heroic day of Sinj is nearing,
The Madonna of Sinj, Queen of all,
Guards our faith in the age-old dream.

Alka of Sinj has borne witness to unique history

Every year, at the first August weekend, the streets of Sinj become a living display of revived history of the small town and the Cetinska Krajina Region. As the Region's greatest wealth is its history, its revival is not reduced to a mere imitation of ancient times. Both history and its revival are unique and authentic. The Knights Tournament of Alka has been the embodiment of a local history.

The Alka phenomenon has been a creation of and the legacy passed on by the Region's splendid history. It is a ″document″ witnessing the past of a part of historical Croatia, the borderland between the Ottoman Empire and The Republic of Venice, Islam and Christianity, the Orient and the West sharing the good and bad. We have learnt the wars, battles, martyrs as well as other misfortunes that the Region met with as a result of the touch of these two civilisations. Little is known, however, about an ennobling influence of the civilisations on the domestic culture, the result of which has been of unique cultural-historical prominence in the world. The Alka Tournament has witnessed it first-hand.

The Alka of Sinj has served as valuable proof that desolation is not the only necessary effect of the touch of civilisations. Indeed, the Alka owes its uniqueness and wealth of substance to adaptability and intercompatibility of diverse cultures. Unique and thrilling age-old qualities of the Alka – the nature of the knights tournament itself, its setting, attires, arms – have been reflected in harmony of the interpenetration of various cultural influences.

The Alka Tournament of Sinj is not a celebration of one's culture superiority in relation to another. On the other hand, it was instituted in appreciation of the Virgin Mary's help during defence of Sinj, but not as a deed of triumphalism. Since cultural exclusivism has not been a feature of the Alka of Sinj, the Tournament's oriental component has established its importance as a historical ″document″ of value.

History of the Cetinska Krajina Region has been more than a history of the division between civilisations though marked by wars and heroes. It has further been a history of the meeting of cultures as well as their interpenetration and ennoblement. The Alka of Sinj is a monument, but also the last living remnant of that unique history. Hence the revival of history in Sinj has been an event of distinctive character – history here is the Alka Tournament of Sinj.