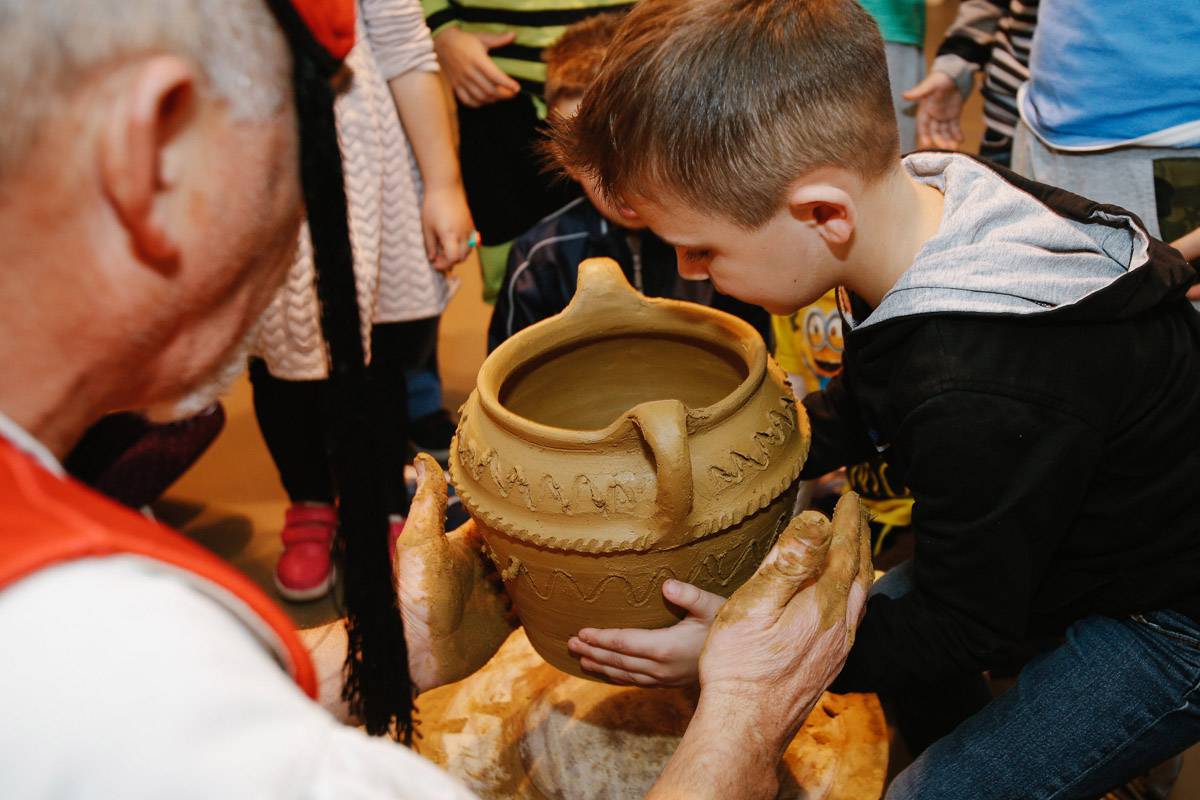 Apart from its rich history, culture, tradition and gastronomy, the Cetinska Krajina Region also abounds with unique and valuable pieces of work made by skilled craftsmen. The value of such crafts which nowadays have, unfortunately, been unstoppably sinking into oblivion, is not only in the making of everyday objects. Fairly more important is the fact that high-value knowledge and skills, cherished for centuries, were passed on from generation to generation through the crafts, to be enriched, perfected and developed among those younger, in this way creating both a family and a local tradition.

One of the most famous crafts (also in Europe) is certainly the making of tobacco pipes in the village of Zelovo, which are even today made using both the technique and the moulds of age-old craftsmen.

The most difficult part of the work includes the making of a two-piece mould from tin and lead. The first thing to do is to carve a wooden model, which is then decorated with various geometric patterns or illustrated by a human head. When there is a mould, a special type of clay is collected and then soaked in water so that small stones and other foreign material are removed from clay. The next day, when the clay has been soaked in water, it is hit by a mallet so that all clots of clay which are not wet enough are broken up. After that, a certain quantity of small balls is made from the thickened mass; formerly two thousand pieces, nowadays two hundred. Both sides of the mould are greased so that the material would not stick to its walls. A small ball of clay is inserted into the mould, which is then closed and put into the stega, a vice-like wooden tool. Pins are threaded through two holes on the mould in order to model the space for tobacco and for a small wooden pipe – kamiš. After the pins have been removed from the mould, the šilo, a wooden tool with a pointed end, is used to pierce a small channel between the space for tobacco and the one for the kamiš. At this point the pipe is ready for drying. The first thing to do is to leave it drying in a special stone vessel. Then all the unnecessary material coming out of the mould is removed from the pipe using a little knife. Pipes are finally collected and fired in a kiln through the night.

In addition to pipe making, craftsmen from Zelovo showed enviable knowledge of making wooden reeds, and they devoted themselves to the making of children's toys as early as the beginning of the 20th century. Wooden toys were handmade by men, and almost all examples are unique. The toys have characteristic features of the region from which they originated: they are painted delicate yellow with simple red and green streaks and dapples with a small number of geometric decorations. Typical motifs on the toys include little horses (one- and two-horse carriages), butterflies on sticks, planes, acrobats, reeds and hammers. The last family engaged in the making of wooden toys was the family of Jakov Delaš. His sons carried on the tradition but, unfortunately, due to lack of interest, there are only museum examples preserved.

Nearly all households in the village of Potravlje used to produce useful clay objects, including bakre (sg. bakra, traditional clay pot), peke, (sg. peka, bell), pots, small pots for storing food, jars for storing fat and honey, wine and oil containers, flower vases, children's moneyboxes. Having placed pieces of clay on the čekrk, a wooden potter's wheel, a potter would hand throw the clay on the wheel. Such products, made with great care, were famous for their quality and durability. These objects were mainly sold at fairs and at the derneci (sg. dernek, parish folk fête) at Sinj, Trilj, Split, Trogir, Kaštela, Solin, Omiš, Imotski, Makarska as well as on our islands – mostly during the tourist season.

Among other things, in the Cetinska Krajina Region flourished the making of different objects essential for everyday household and farming use as well as for use in other spheres of life.

In the villages of Gljev and Glavice the opanci oputari used to be made, and they were sold on Saturdays in the pazari (sg. pazar, marketplace) and at derneci. As there used to be many more donkeys than today, nearly all villages had their own craftsman who made the wooden samari (sg. samar, pack saddle). The village of Bitelić was famous for its blacksmiths who shod horses and made widely used various metal objects: latches, locks, hoes, axes, billhooks... Wooden barrels used to be made in the village of Čaporice. The Otok village near Sinj was famous for the making of the Cetina boat, Croatian Ministry of Culture intangible cultural heritage under protection. The boats were also made in the village of Bajagić but using a different technique.

View the embedded image gallery online at:
https://www.visitsinj.hr/en/guide/about-sinj/ethno/ancient-crafts-of-the-cetinska-krajina-region#sigProGalleria9a06774f1e
back to top