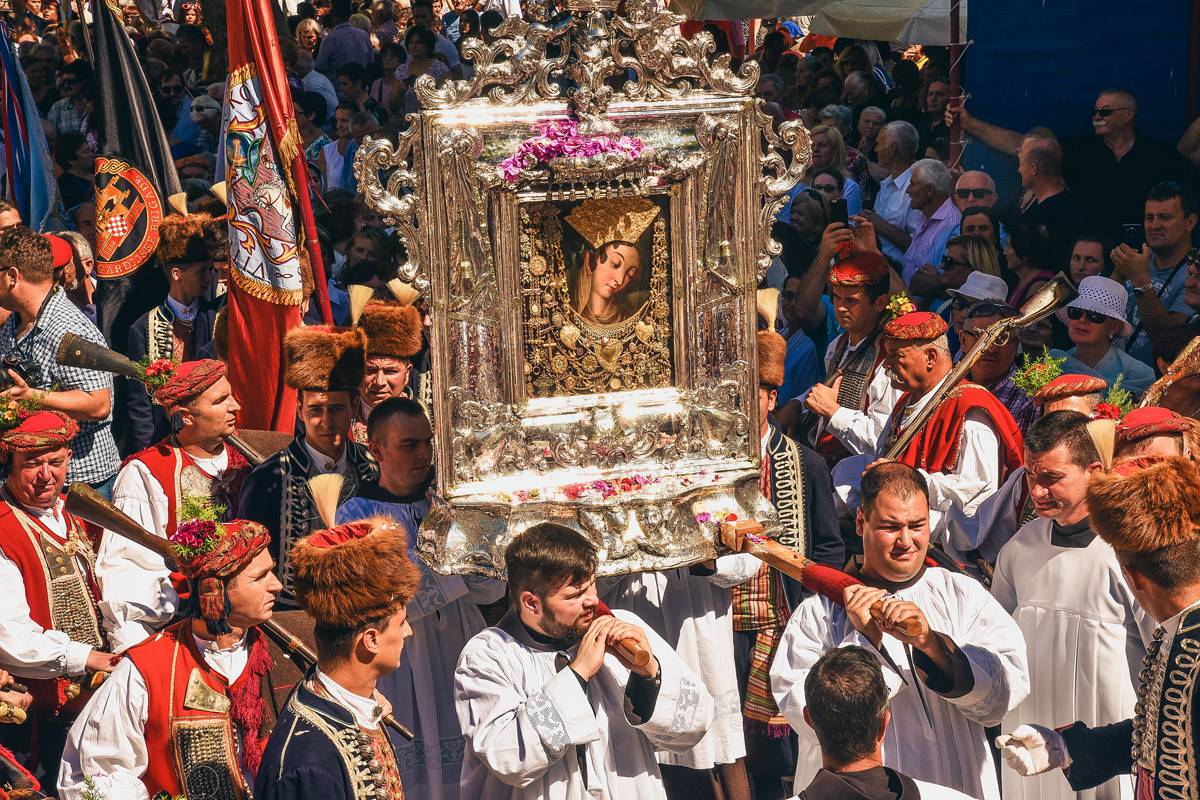 The Croatian people have always worshipped the Blessed Virgin Mary and in tribulations they have prayed for her help. They have trusted in her heavenly intercession, honouring her in token of their gratitude as the Queen of the Croatian people. They have also invoked her through history as fidelissima advocata Croatiae (the most devoted advocate of Croatia).

In Sinj, one of the greatest Marian sanctuaries in Croatia, a celebration of Feast of Assumption on 15 August is given the special solemn significance. A vast multitude of pilgrims comes to Sinj with only one aim - to kneel with hands clasped in front of the Miraculous Madonna of Sinj, to bow in silent prayer and gratitude to heavenly Mother, to light a candle before the Image of the Madonna and open their hearts to her grace. Many people from far away vow to pilgrim barefoot or just on foot. The day before the celebration, užežin, Sinj is already crowded with people and the hubbub, making the streets and the Church too narrow. The first mass, the traditional early service, is celebrated at 4 a. m. At 7 a.m. the sacred votive mass is celebrated in the small church at the Old Town, thus reviving the feeling of gratitude to the Madonna for having delivered us from enemy’s yoke and for comforting us in many temptations.

The old fortress is resonant with the song of worship The Madonna of Sinj, Holy Virgin, God has glorified you wonderfully, wonderfully, voices of the entire world celebrate you, dearest Mother of your people... At 9.30 a.m., accompanied by the solemn ringing of bells and the sound of fanfare, the Image of the Miraculous Madonna of Sinj is taken out of the Church to be brought into a solemn procession through the streets of Sinj. It is a great honour to carry the Image on one’s shoulders. It is carried by the Alkari, the Alka squires, policemen, members of the Croatian Army, firemen, members of the Association of Croatian volunteer combatants, members of the Association of Homeland War veterans and volunteers, members of civil associations, nuns and Franciscans, bandsmen, girls in folk costumes, mayors and benefactors of the Sanctuary of the Madonna of Sinj.

Cannon balls (mačkule) are fired from the Old Town fortress, thus indicating the benediction place. The people of Sinj sprinkle flower petals from the windows on the Madonna’s path. Accompanied by the prayers of the rosary and liturgical songs worshipping the Madonna, the Image is brought back to the square in front of the Church where the service is celebrated. In the evening, the mass is also celebrated in the town square, but without the procession. Feast of Assumption is further celebrated as the Day of the Town of Sinj.