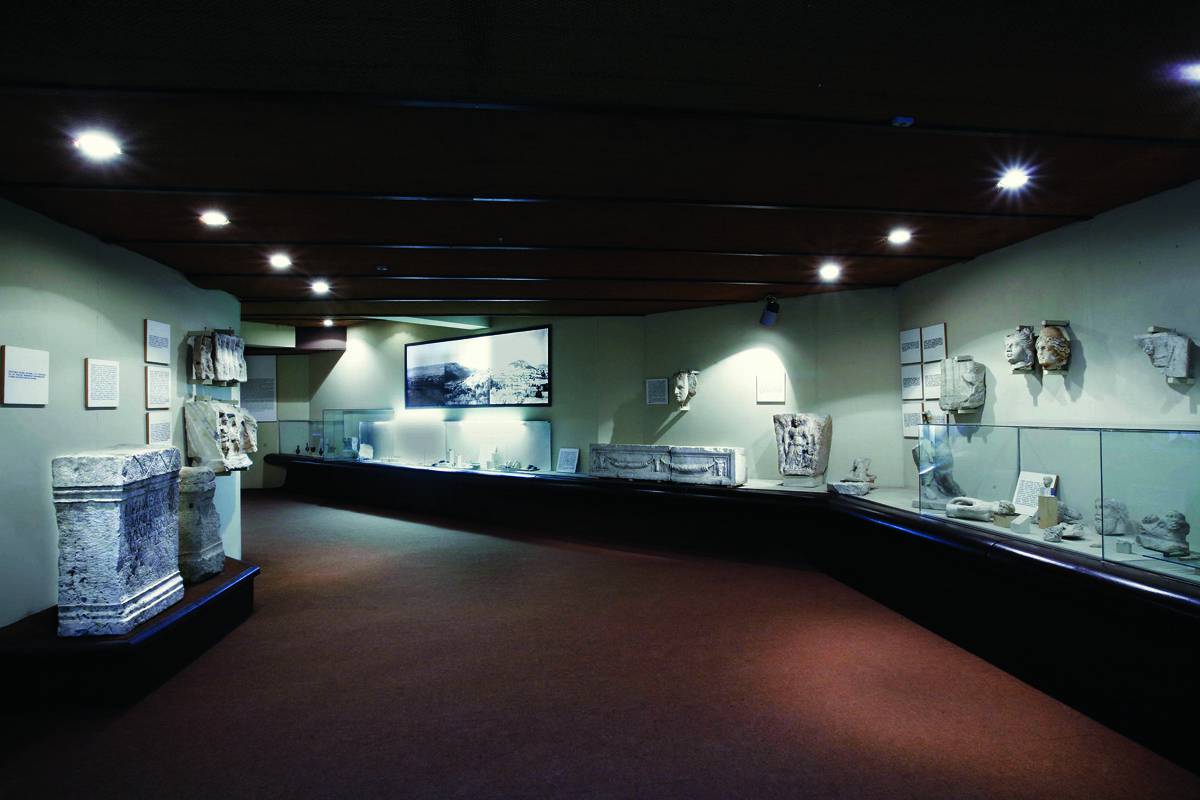 The archaeological collection of Sinj Franciscan monastery is considered to be one of the oldest and most valuable collections in Croatia. It was founded in 1860 by diligent and ardent Father Ante Konstantin Matas, a great humanist and reformer, the headmaster of the Franciscan Grammar School in Sinj. The Collection’s foundation was prompted by the find of the head of Heracles at Čitluk, ant. Aequum, an exceptionally rich archaeological site.

The Collection mostly comprises the finds from Sinj environs. Apart from the head of Heracles, the Collection includes a number of valuable exhibits, such as the lower half of an emperor's statue, probably the one of Emperor Claudius I, since it was him who granted Aequum the status of colony and its inhabitants the status of Roman citizens, as witnessed by Čitluk Latin name, Colonia Claudia Aequum. Moreover, there are other valuable exhibits: the statue of goddess Diana Lucifera, 172 cm in height including the pedestal, numerous epitaphs and memorial inscriptions, altar, remnants of the statue of goddess Diana from Gardun, the Medusa relief, the Diana and Bacchus relief, Roman clay pottery, Roman sestertii, the extraordinary statue of goddess Hecate, a large marble inscription M. VALERIVS.F..., three epitaphs of members of the NAEVIVS (NAEVIENUS) family, who made notable officers in Aequum, the DIIS MANIBUS altar.

The Collection preserves the prehistoric finds, such as bronze objects from Kaljic and fragments of ceramic pottery, stone knives and arrows. The ethnographic collection includes objects associated with the folk life and customs of Sinj. Folk costumes, which have preserved the original colour due to the conditions in which they have been kept, stand out in the ethnographic collection. The church collection comprises liturgical objects made of silver, among which the most representative are the ones from Gothic period whereas the most of them date back to the Baroque. Furthermore, there are valuable Baroque paintings as well as the vestment from the 17th and 18th centuries.

The archaeological collection further includes a valuable numismatic collection of sample coins – early Greek, Roman (from the Imperial and the Republican age), Byzantine, Venetian, Bosnian, Turkish and coins of Dubrovnik. Other valuable coins include 14 silver denarii from Sisak (of Emperors Diocletian, Maximilian and Constantius I) and the collection of Split coins, bagatini, (13th c.–14th c.), found in 1962 at Trilj near Sinj. In the last twenty years, the collection has been enriched by golden and silver jubilee coins from all over the world. Besides that, of great importance are the ancient glass samples as well as a large number of prehistoric objects. The Archaeological Collection of the Franciscan Monastery is cultural property under protection of the Ministry of Culture of the Republic of Croatia.

View the embedded image gallery online at:
https://www.visitsinj.hr/en/discover/museums/archaeological-collection-of-the-sinj-franciscan-monastery#sigProGalleria7bc07f8fe9
back to top