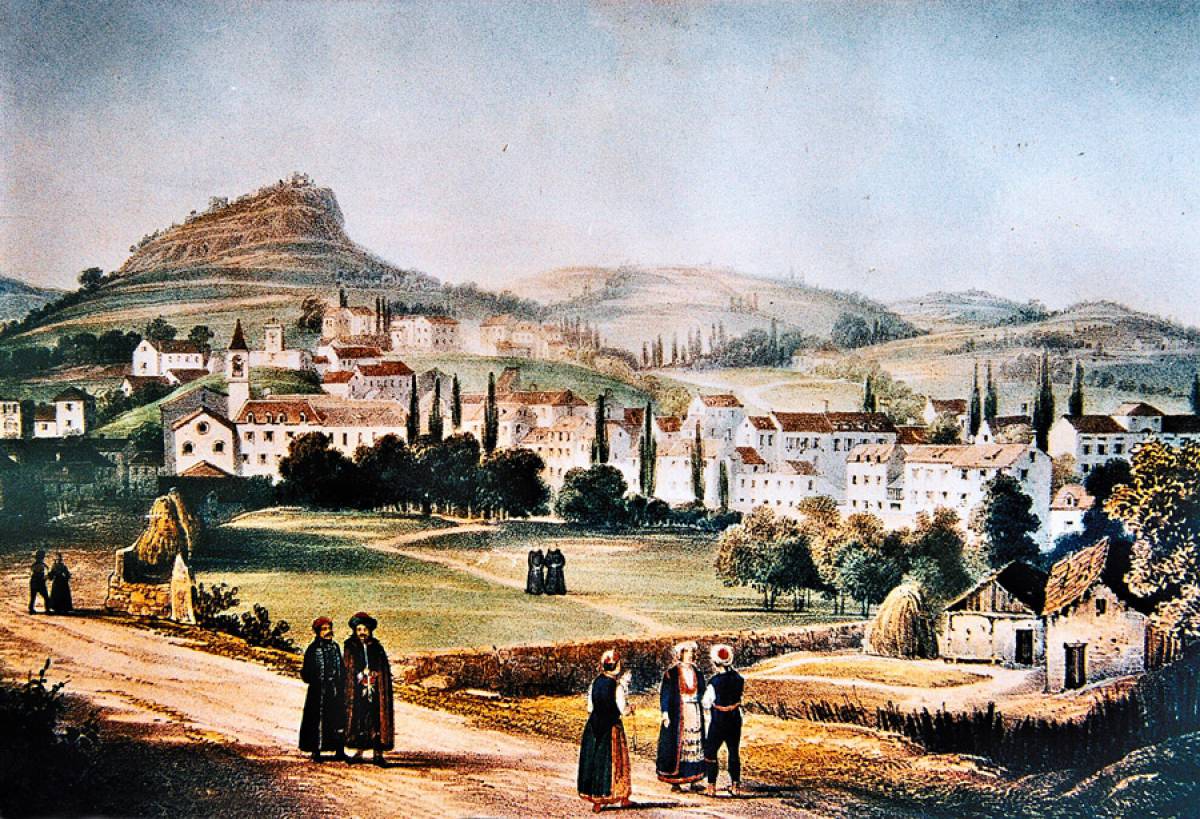 The archaeological finds are evidence of the fact that the Cetina area has been inhabited since prehistoric times. A number of finds from the end of the Copper Age to the Middle Bronze Age are attributed to the so-called Cetina culture. Suitable geographic position, caves, hills and fertile valleys have preconditioned the development of agriculture as well as the development of cattle breeding on the mountain slopes.

The natives, members of the Illyrian tribe Delmates, appeared in the area during the Bronze Age and their development continued until the Romans had arrived. Although the Delmates persistently opposed the Roman authorities, numerous insurrections were successfully repressed. After the fall of the Roman Empire, barbarians repeatedly invaded the area.

At the beginning of the 7th century, Croats came from White Croatia (the Vistula region in today’s Poland) and settled in the region of Dalmatia. The archaeological finds dating back to the 7th - 9th century period serve as evidence of the Christianisation process through the influence of Franks. This was the time of the foundation of the first Croatian principalities. In the later period, when a kingdom was founded, fortified Sinj became the centre of the Cetina County. As the princes grew in power and influence, the Cetina Principality was founded. The title of princes of Cetina was first acquired by the Šubic princes and from 1345 it belonged to the Nelipic princes. The Franciscans of the Bosnian Vicary were encouraged by Prince Ivan Nelipic to come to Cetina, the town at the foot of Sinj fortress. There they built St Mary’s church as well as the monastery, which was plundered and burnt by the Ottomans in 1492. In 1513 Sinj fell into Ottoman hands, up until 1686, when it came under Venetian rule. The Ottomans, however, were still attempting to win back Sinj. The most significant battle was fought in 1715, when 700 defenders of Sinj repulsed an attack of tens of thousands of Ottomans. The disordered Ottoman army, weakened by hunger and the outbreak of dysentery, left the Cetinska Krajina Region.

Sinj remained under the direction of Venetian governor until 1797, and from that year to 1918 it was under Austrian rule. During this period the Town was also under French domination, but this was only briefly.

After the Kingdom of Serbs, Croats and Slovenes, and then the Kingdom of Yugoslavia, the Independent State of Croatia, the Italian occupation and the communist Yugoslavia, Sinj has finally become part of the independent and sovereign Republic of Croatia.The Day of the Town of Sinj is celebrated on August 15. On that day Assumption of the Madonna, the patroness of Sinj, is celebrated as well. 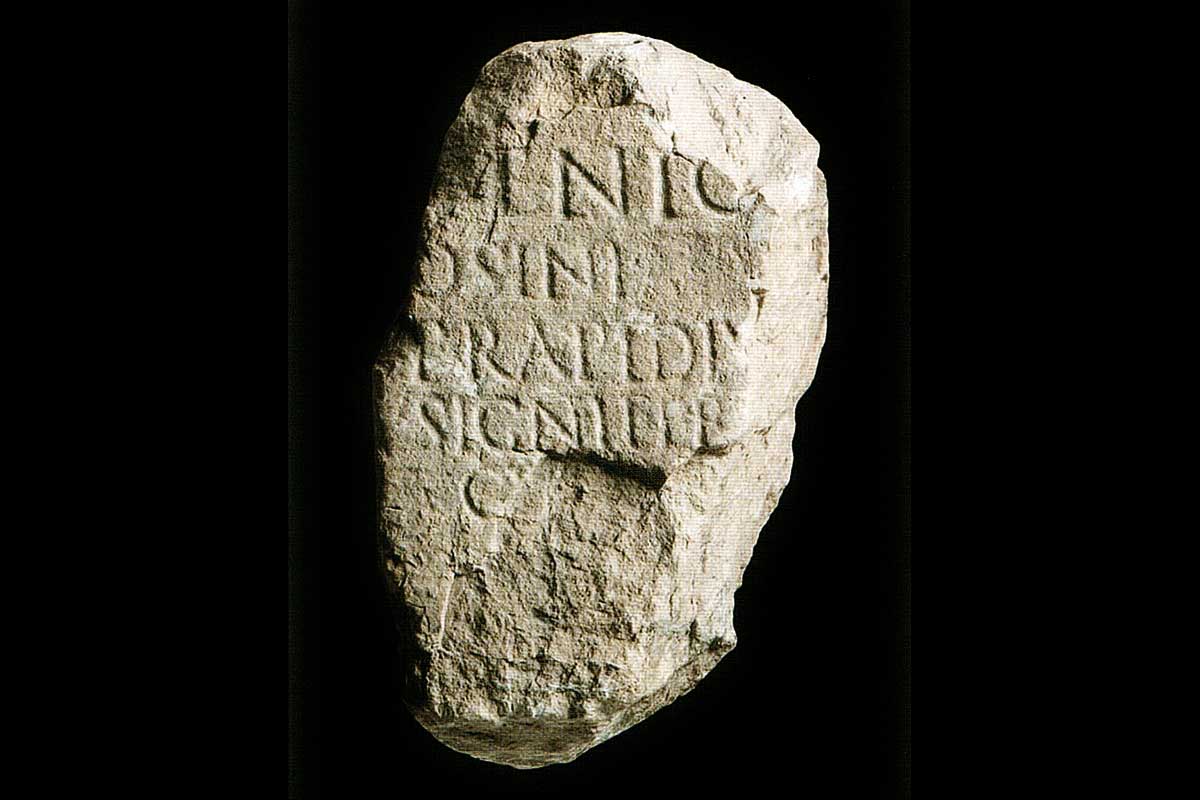 A votive altar with a damaged inscription reading /D/O/M/ et /G/enio Osini/atum/ P/ub/ius/ Rapidiu/s/ signifer c/ohortis... p/   (To God Foremost and Greatest and to Genius the patron of Osiniatum Publius Rapidius the standard-bearer of the cohort … raised). The inscription serves as evidence of the name of the town at the foot of Sinj fortress (Osinium, Osinij), from which Vsinj eventually originated. 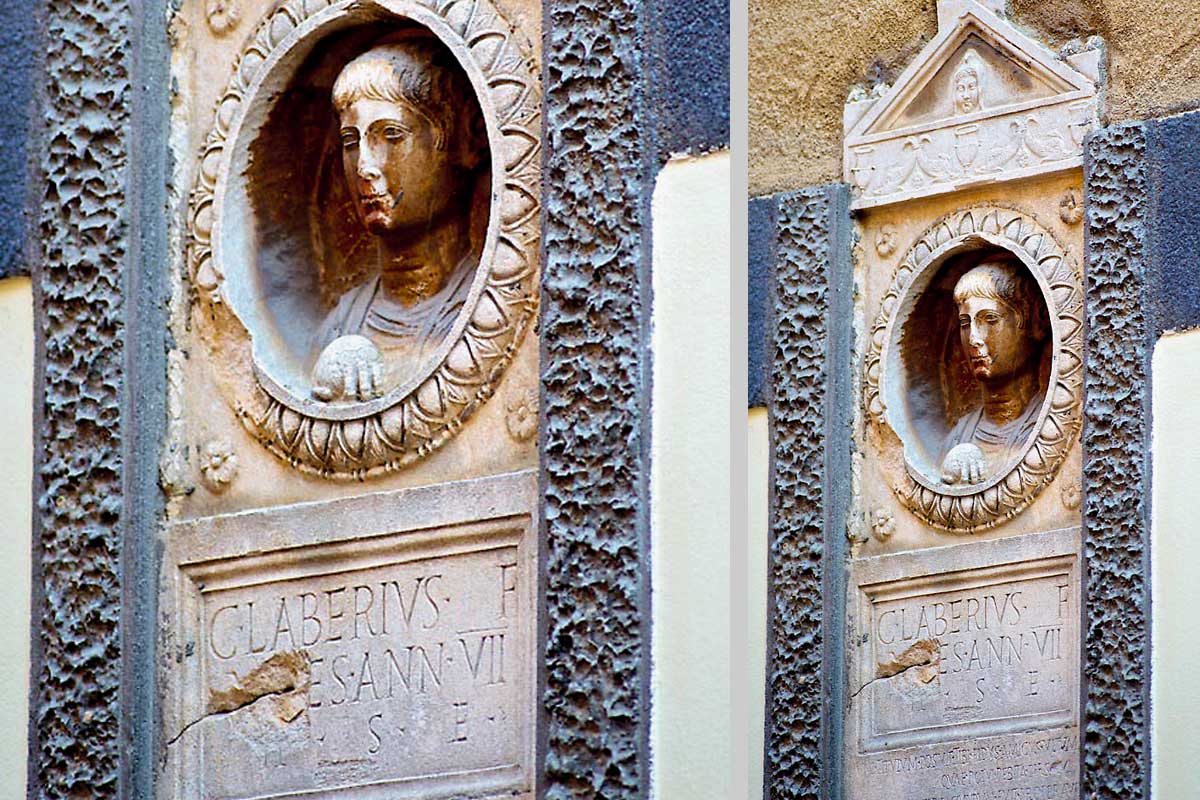 A tombstone of a seven-year-old Roman boy Gaius Laberius holding a ball with hexagons joined in the manner of a net-like ornament. The symbol of a real leather ball, it is considered firm evidence that football in Europe was first played in the Cetinska Krajina Region. It was found in the Tilurium site, more precisely the Gardun site, and dates back to the 2nd century.

By the Treaty, Prince Ivan Nelipić, together with his descendants, was granted the Royal Borough of Sinj (castrum nostrum regale Zyn) and the town of Cetina as well.

The Charter, issued in Avignon, allowed the Franciscans of the Bosnian Vicary to come to Sinj, according to Prince Ivan Nelipić’s wish. Both the church and the monastery of St Mary were founded at Cetina, the town at the foot of Sinj fortress.

After Sinj had been delivered from Ottoman rule, the people and Franciscans of Rama arrived to the Cetinska Krajina Region which was devastated by war. The Franciscans brought along from St Peter’s monastery the image of the Mother of Mercy, later to be known as the Madonna of Sinj.

One of the most scenic and memorable symbols of Sinj, located in the very town centre, opposite the Church of the Miraculous Madonna of Sinj. Kamičak is a star-shaped fort, built in 1712 on the hill of the same name. In the south-west, it is joined to the pertaining kvartir (the cavalry barracks), the today's Alka Knights Court (Alkarski dvori). Kamičak’s present-day layout dates back to 1890 when the walls were built and the pine trees planted. A tower that used to serve as an observatory is built in the fort. On the tower there is a clock ringing three minutes before the hour, and ticking on the hour. At the top of the tower there is a bronze bell cast in the foundry of the famous Italian family Colbachini. The foundry was established in 1745 and in 1898 it was granted the right by the Pope Leo XIII to use the papal arms in their production. To this day, the Colbachini foundry has been the only foundry in the world with this exceptional honour. On the bell, richly floral-ornamented, four reliefs in circles stand out – The Madonna Embracing the Child, Moses, The Crucifixion and St George Slaying the Dragon. The year MDCCCXXVIII (1828) is inscribed on the bell, as well as the author Opera di Giovanni Colbachini Trieste. At the top of the bell there is an inscription reading A fulgore et tempestate libera nos Domine (From the thunder and evil times, deliver us, Lord). It probably has the origin in folklore, saying that ringing of bells or mortar fire chases away the clouds and hail. 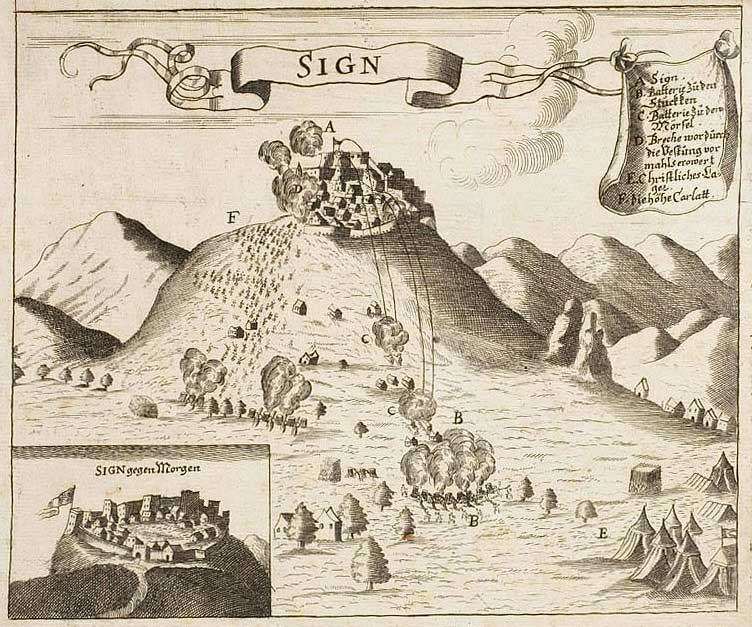 In the 1513-1686 period Sinj was held by the Ottomans. In 1686 the Town came under Venetian rule. The Ottomans, however, were still attempting to win back Sinj. The most significant battle was fought in 1715, when 700 defenders of Sinj repulsed an attack of tens of thousands of Ottomans. The disordered Ottoman army, weakened by hunger and the outbreak of dysentery, left the Cetinska Krajina Region. 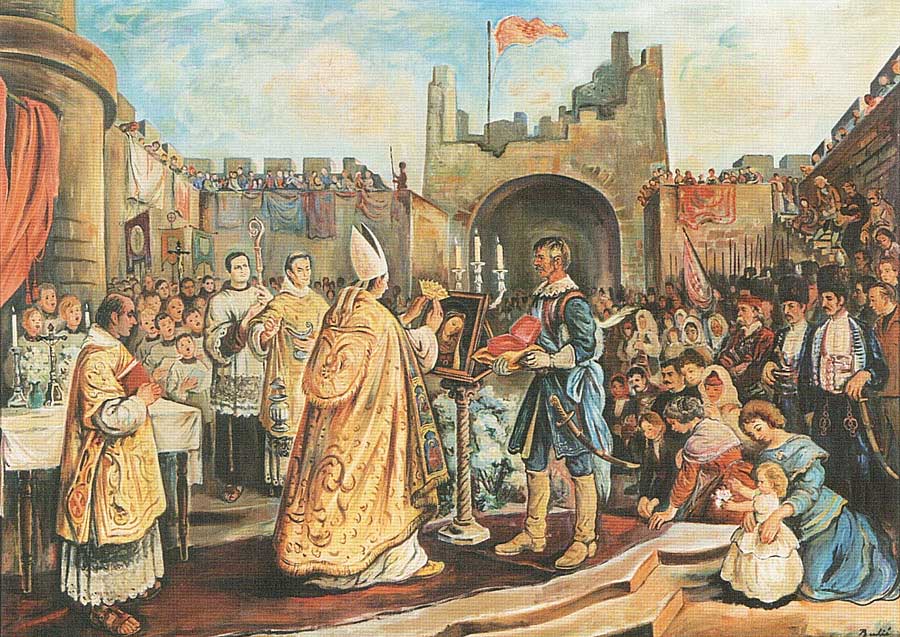 In honour of their heavenly patroness and as token of gratitude to Her for miraculous defence and deliverance of Sinj from the Ottoman siege, officers and soldiers collected 80 sequins (Venetian gold coins) and had a golden crown with a cross made in Venice in order to crown the image of the Mother of Mercy. On the crown there is an inscription reading IN PERPETUUM CORONATA TRIUMPHAT - ANNO MDCCXV (Triumph in eternal coronation – the year of 1715). The Archbishop of Split, Stjepan Cupilli, crowned the Image after the votive mass had been celebrated. 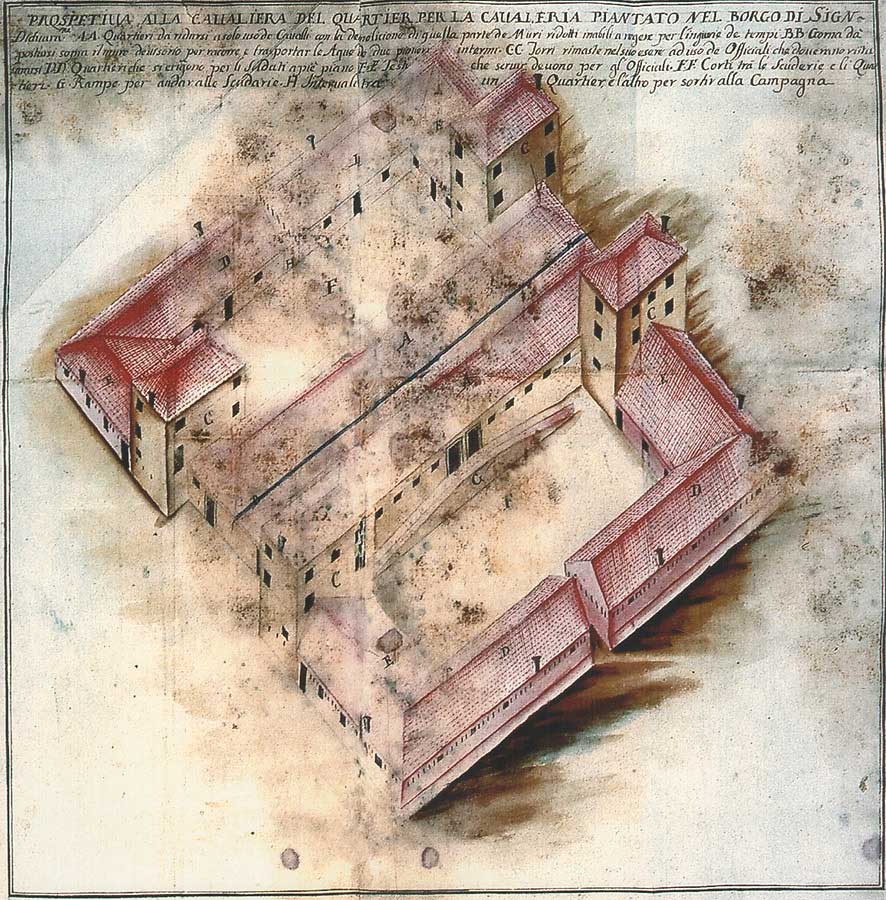 The Court was built in 1760 as a square fort with a two-building complex. Each complex includes two square towers and two inner courtyards separated by the stables. A complex could house four companies of horsemen, together with their horses. Throughout history the fort was used by all the armies present in Sinj, particularly by the French Army in the early 19th century, and the Austrian Army. It was the time when Home Guard three-storey barracks was added to the fort. 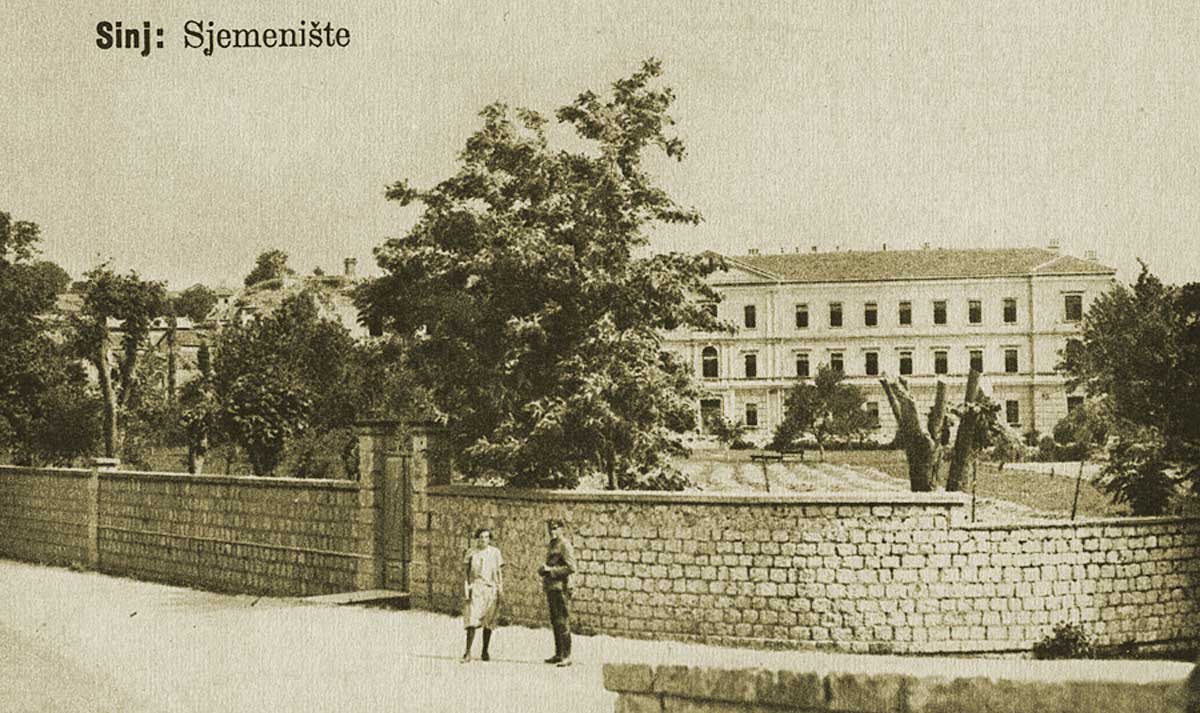 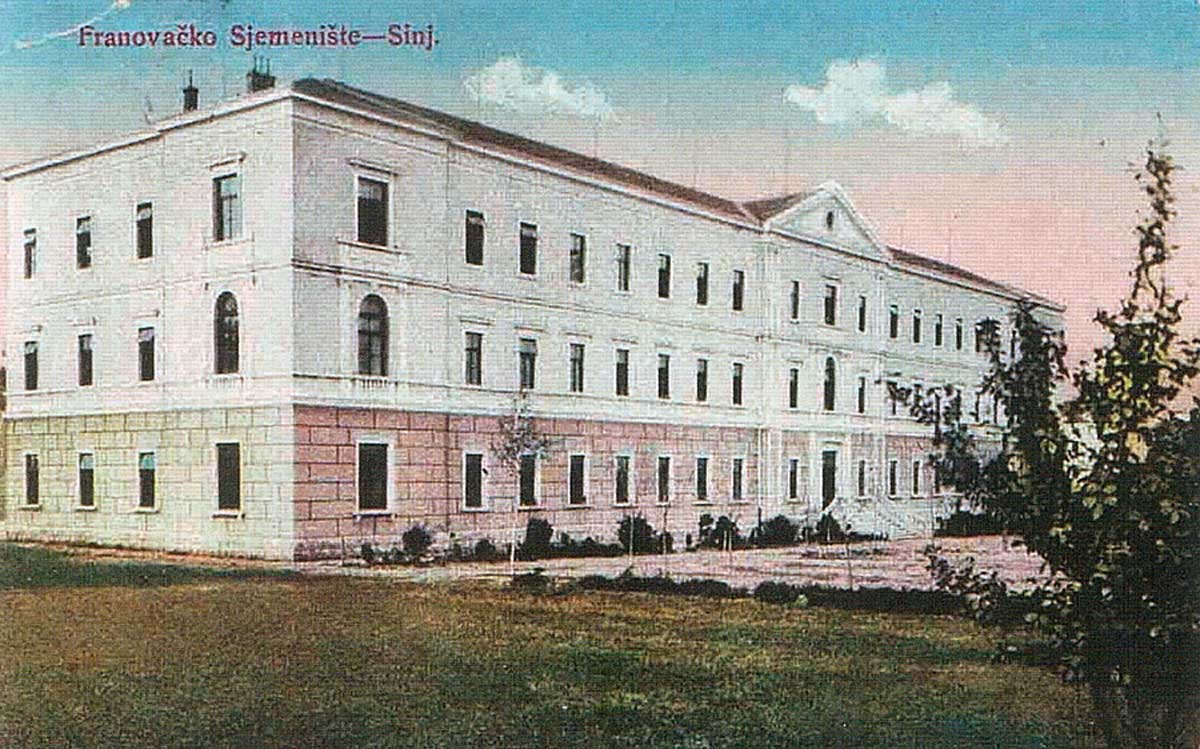 As the oldest secondary school in the Dalmatian hinterland, it started work in the academic year of 1838/39. Through the 1854 reorganisation it acquired the right of public work. Sinj Franciscan Grammar School is also the first secondary school in southern Croatia which introduced the Croatian language as a language of instruction.

A small church, which is nowadays at the Town, was built in 1887, in commemoration of two centuries of arrival of the people of Cetina from Rama. It is a symbol of a vow, a close alliance and devotion which have for centuries bound the Cetina people to the Mother of God. 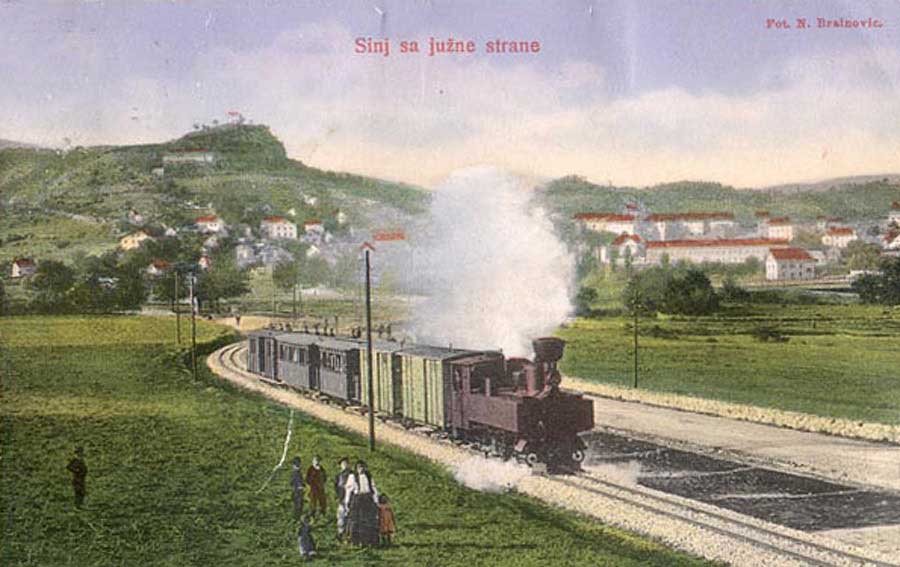 The railway, also known as rera, joined Sinj to Klis and Split from 1903 to 1962. It was very significant for Sinj cultural and economic development. 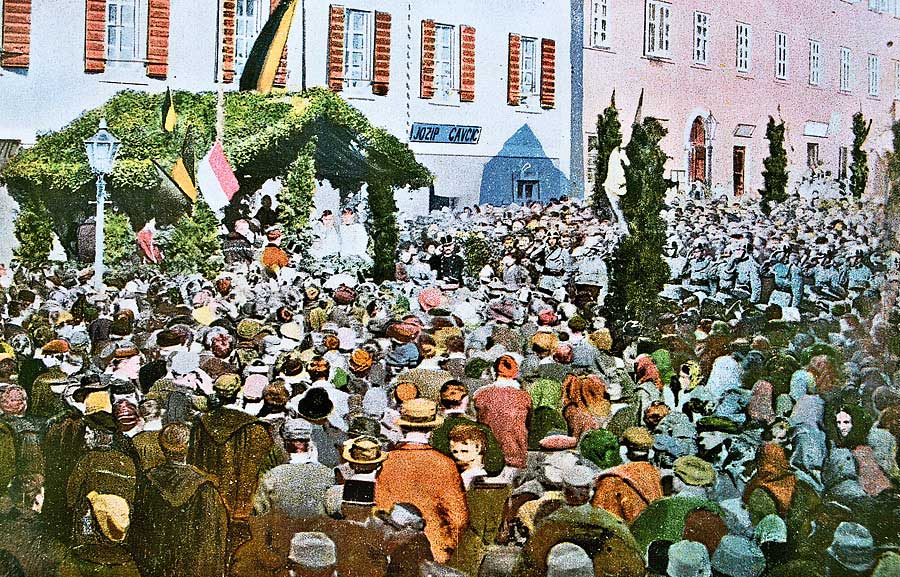 During the office of Mayor Stipe Celmić the town water supply system was built, supplied from the Kosinac spring, a tributary of the Cetina River.

The opening of the Town’s olympic-size swimming-pool took place on 26 July 1953. Sinj swimming-pool was among the first in the former Yugoslav state. It was built owing to the efforts of then Sinj Mayor Vice Buljan, who was also the Alka Tournament Master (alkarski vojvoda). In the later period he further filled the post of Minister of Fisheries in the former People’s Republic of Croatia. There are many witty anecdotes associated with his life. The character of Vice Buljan was embodied by the famous Croatian actor Boris Dvornik in the popular TV serial Čovik i po.