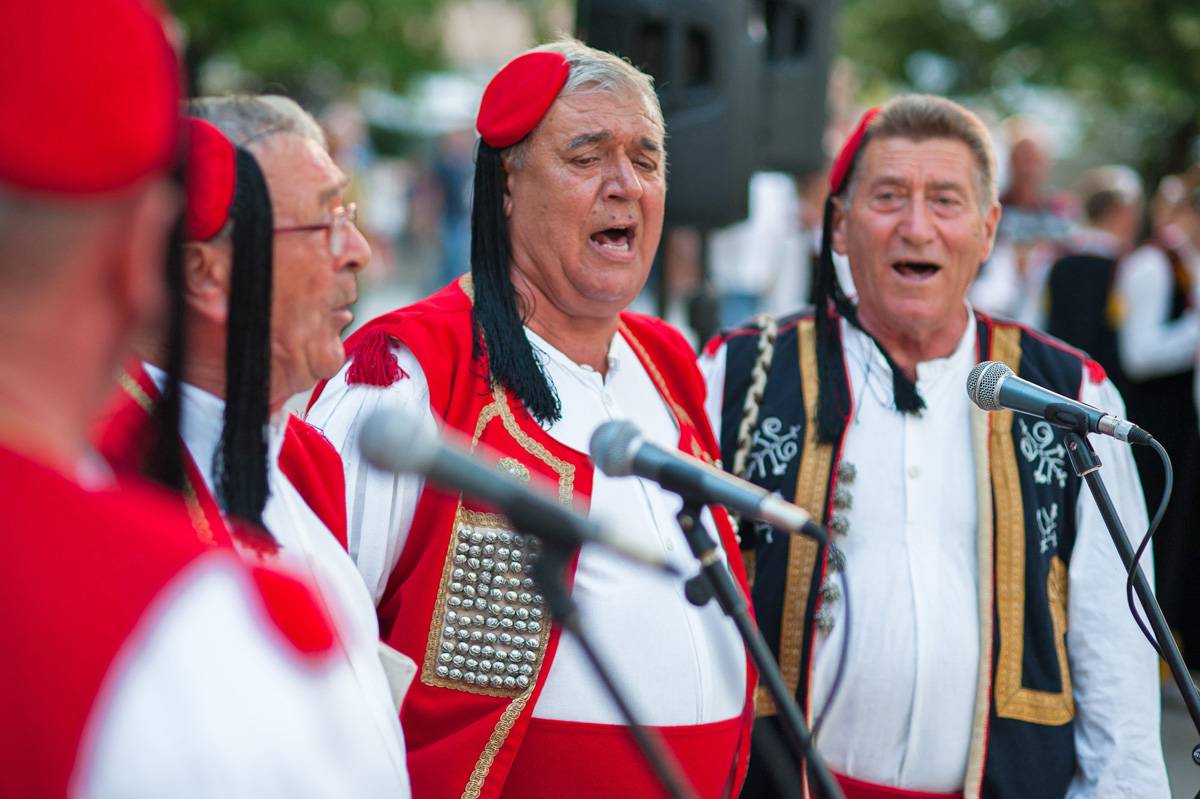 The sound of the old ojkanje, ganga and rera singing have been passed on from generation to generation in the Dalmatian hinterland. Rarely found in black and white, folk verses are nevertheless never forgotten, owing to the inspired youth who preserve the values of their ancestors.

Since the importance of the ojkanje two-part singing, named after a distinctive cry oj (hey), was also recognised by UNESCO, in 2010 it was included on the List of Intangible Cultural Heritage in Need of Urgent Safeguarding. The ojkanje is performed by singers (male or female) using various voice-shaking techniques created by the throat (iz grla). Each song lasts as long as the lead singer can hold his or her breath. The lyrics cover diverse themes ranging from love, geographic, religious, to current social issues. The ojkanje, ganga and rera primarily owe their survival to organised groups of local enthusiasts who continue to pass on the skills and knowledge to younger generations, but they also perform at music festivals in the country and abroad.

The ganga singing was included in 2009 on the Ministry of Culture's list of protected cultural heritage of the Republic of Croatia. The ganga is an integral part of the centuries-old music expression of the regions of Imotski and Vrgorac. Except in our regions, it also appears in neighbouring Bosnia and Herzegovina.

The two-part throat singing, the so-called rera, is characteristic of the Cetinska Krajina Region. The rera is performed at full voice: there is the lead singer followed by the others who actually sing rera.

As a vivid type of singing, deep rooted in the identity of the Cetina people, more often than not the rera describes everyday events, tensions between neighbouring villages as well as those between different characters and customs, it mocks human frailties, very often and using a special vocabulary. The short rhyme, most commonly a couplet, contains such an unusual miniature with a clear message, referring to either the one's sweetheart, mother-in-law, Our Lady of Sinj or to saints. The rera used to spice up and enliven all the derneci, social gatherings or the sila (sg. silo, sitting) and the ašikovanja (sg. ašikovanje, courting).

View the embedded image gallery online at:
https://www.visitsinj.hr/en/guide/about-sinj/ethno/rera-singing-of-sinj#sigProGalleria3dc1c5e909
back to top